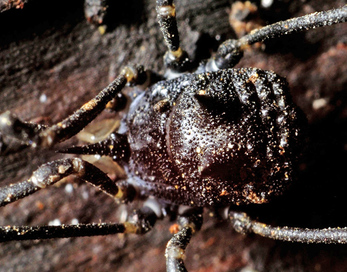 Acuclavella comprises seven species of medium sized harvestmen with a globular body uniformly blackish to dark brown in coloration and ornamented with hemispheric warts. Males have raised glandular fields on the basal segment of chelicerae. Penial morphology is simple and no distinct characters seem perceivable between species. Species discrimination utilizes differences of dorsal spination varying from long and acute to a total lack of spines. Acuclavella is restricted to the north-western United States with most species in a consistent distribution area in Idaho and two species more isolated in Washington. Species are difficult to delineate and some of the early describe ones appear not monophyletic and in further need of investigation (Shear 1986, Richart & Hedin 2013).

Ecology and Life History
Species inhabit permanently wet microhabitats along small streams, preferably with forest cover. Most known localities are at higher elevations. In this context it is interesting to mention that the Acuclavella habitus resembles members of the unrelated European nemastomatid genus Paranemastoma, often inhabiting similar ecological niches. Species are believed to have an annual life cycle (Richart & Hedin 2013).