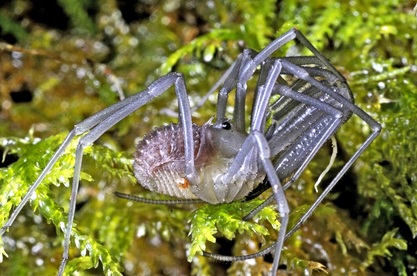 Taracus are medium sized to large bodied harvestmen with peculiar elongated chelicerae. Male genital morphology is simple and chelicerae seem not to exhibit glandular structures as in other Dyspnoi-groups. They differ from morphologically similar, but unrelated, animals with large chelicerae by the form of the male genitalia and the composition of the sternal region. The distribution is mainly in western North American, especially along the Coast associating humid forests but also in the Rocky Mountains and other high altitude ranges as far south as Arizona and New Mexico (Shear 1986). A single species has been described from Siberia, Russia (Ljovushkin 1972).


Taxonomy and Discussion of Phylogenetic Relationships
Many descriptions lack explicit type localities and some are likely to be based upon juvenile specimens. Most species need to be redescribed, no phylogenetic concept exists within the genus; therefore, a revision is overdue.

Ecology and Life History
Taracus species inhabit cold and permanently humid environments, mainly in dense forests, but are recorded from caves as well. Specimens from forests seem to mature in late autumn.